When does implantation occur?

If you are trying to get pregnant, it is natural for you to anxiously look for signs to confirm that you could be pregnant this cycle. Medically, pregnancy begins when the fertilized female egg or the embryo lodges itself into the uterine wall, which is called implantation.

Implantation is a crucial step in your journey towards a successful pregnancy. However, to improve your chances with successful implantation, we must first understand what it is, when it occurs and what we can do to facilitate it.

How does the body prepare for implantation?

Every month during your menstrual cycle, your body prepares itself for the possibility that you might get pregnant during this cycle. Then, around two weeks before your period, a single egg is released from the ovary in a process called ovulation.

Estrogen, a female hormone that plays a vital role in fertility, starts rising 3-4 days before ovulation while LH (Luteinizing Hormone) rises 24-36 hours before ovulation. Here’s the guide you need on LH and ovulation. Once the egg is released, your progesterone levels start rising thereby confirming ovulation.

Tracking the levels of these hormones is an excellent way to predict when you could be ovulating and increase your chances of getting pregnant during your fertile window. Ovulation trackers like the Inito Fertility Monitor help you identify up to 6 fertile days of your cycle and confirm your ovulation accurately from the comfort of your home.

How does implantation take place?

The egg released after ovulation rests in the fallopian tube until it gets fertilized by the male sperm after you have unprotected sex, or if the sperm is introduced inside the body through artificial reproductive techniques.

If the egg is fertilized during your fertile window - four days before upto one day after  ovulation, then you might be able to catch some early signs of pregnancy on the 10th-day post ovulation (10 DPO).

Once the egg is fertilized, it travels into the uterus, where it latches on and inserts itself into the uterine lining. Once the fertilized egg is implanted in the uterus, you are officially pregnant. The embryo can now get the blood supply and nutrients it needs from the mother’s body to grow and mature.

After implantation occurs, it triggers the release of pregnancy hormones like progesterone, estrogen and beta hCG, which work together to help the baby grow in the uterine cavity. It also stimulates the development of the placenta.

Key Players in the Pregnancy Process:

When does implantation occur?

Implantation can occur anytime between 6 DPO and 12 DPO, and days 8 to 10 are usually the most common. Studies show that the later the fertilized egg gets implanted into the uterus, the higher the chances of miscarriage. Research reveals that the risk of pregnancy loss is 26% if implantation occurs ten days post ovulation.

It can be beneficial to track your cycle and find out your ovulation time, using fertility monitors like Inito so that you can roughly predict if the vague symptoms you’re feeling could be signs of pregnancy or not.

What does implantation feel like? Implantation symptoms to watch out for

After successful implantation, progesterone levels continue to rise, which mimics the signs of an expected period. It is easy to confuse the symptoms of implantation with premenstrual syndrome (PMS). Here are a few common implantation signs to look out for. 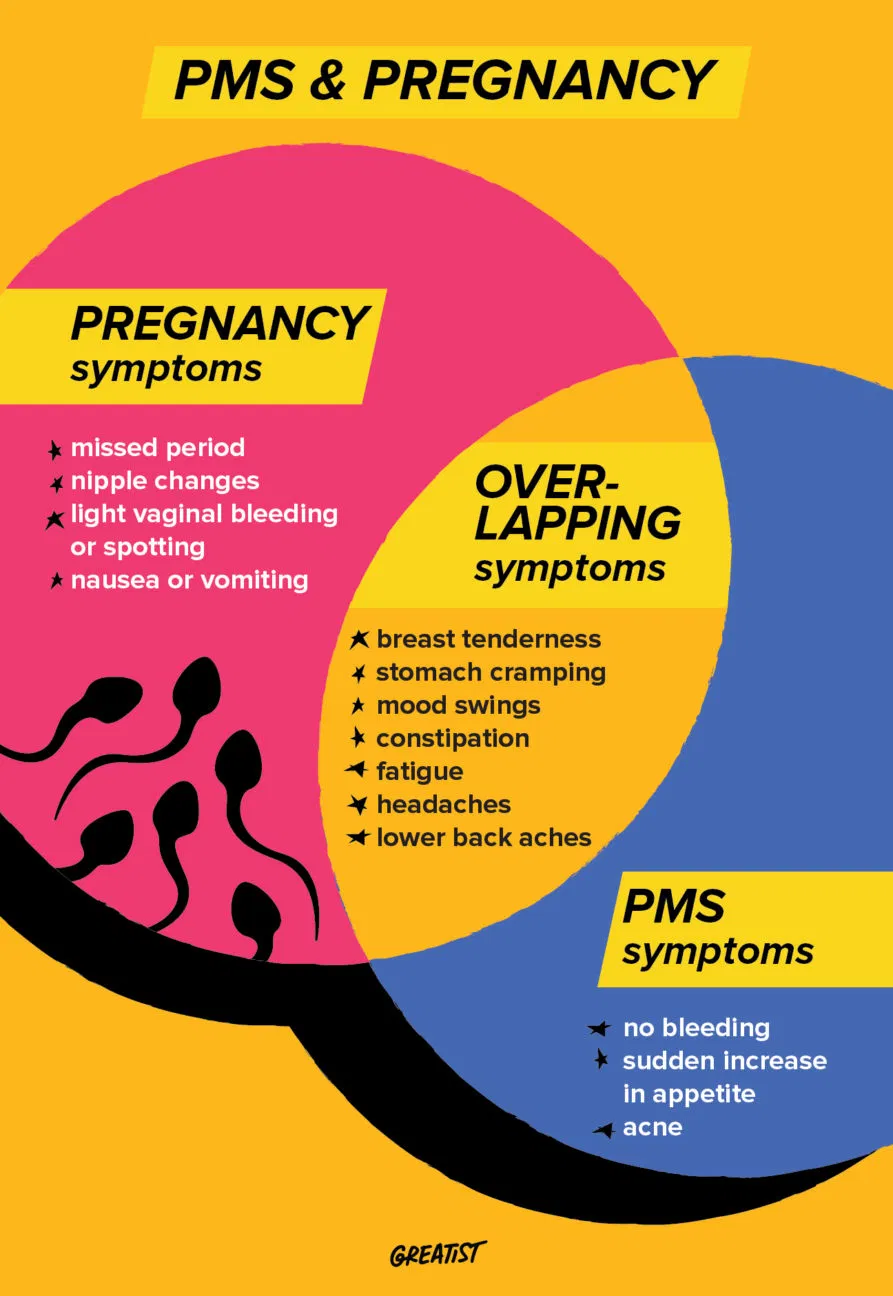 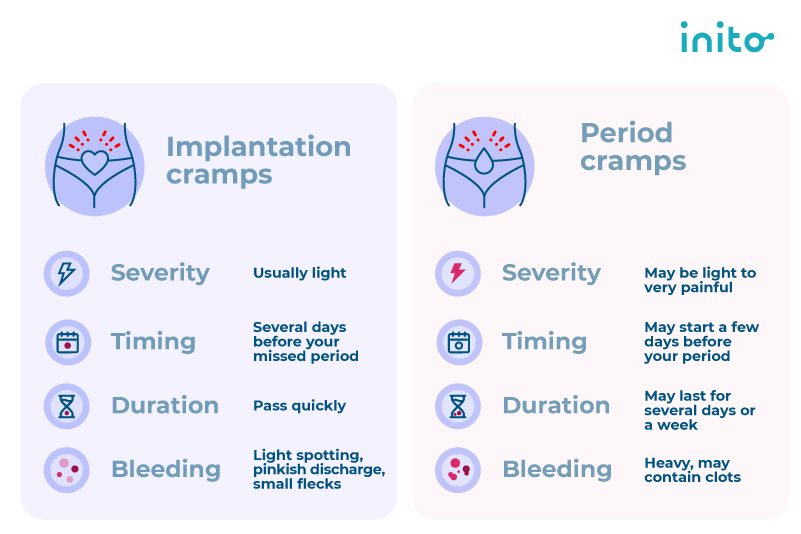 As the fertilized egg begins to insert itself into the endometrial lining of the uterus, it causes the release of hormones called prostaglandins, which are responsible for pain and muscle contraction. This is what you may perceive as implantation cramps.

At the same time, progesterone causes constipation as it slows down the contraction of smooth muscles in the intestinal walls. This uncomfortable muscle movement may also make itself felt as painful stomach cramps.

With the way the menstrual cycle is timed, implantation can often clash with the beginning of your period. This is why implantation cramps are often mistaken for pre-menstrual cramps.

The most typical indication of pregnancy is a missed period. However, during the early stages, some women may experience light bleeding or spotting, which is seen as a pinkish discharge, flecked with blood, which may be accompanied by cramping.

Spotting may occur 1 to 2 weeks after fertilization and is seen in 15-25% of pregnancies.

It usually lasts 24-48 hours compared to regular periods, which can last up to a week.

However, if you experience bright red vaginal bleeding, heavy bleeding with clotting or significant pain or cramps, you should visit your doctor to rule out any complications.

When you track your cycles to pinpoint your ovulation dates, you might also be monitoring your basal body temperature (BBT).

Some women may also experience a secondary dip in body temperature that lasts for around one day and occurs 7-8 days after ovulation. Referred to as the “implantation dip”, it is caused due to a surge in estrogen, which lowers body temperature.

In addition, a temporary decrease in progesterone occurs as the corpus luteum is destroyed and the placenta takes over.

Due to the fluctuations in progesterone and estrogen after ovulation, your breasts could swell up, causing pain, tenderness, and discomfort. Aside from your breasts, you could also experience bloating in other parts of your body like your stomach and face, and swelling in your feet.

One of the most well-known signs of early pregnancy is nausea and the dreaded “morning sickness”. Although some women can experience it at any time of the day and even in response to certain foods or smells.

Rising progesterone and HCG levels slow down digestion and cause nausea, made worse by a more acute sense of smell and taste.

Studies show that in most successful pregnancies, the embryo implants itself into the uterine wall 8 to 10 days after ovulation. If implantation is delayed after this period, the risk of early loss of pregnancy increases.

There are many reasons why the embryo may not implant into the uterine wall as expected.

Studies show that the age of the mother, her smoking status, stress levels, obesity risk, and immunity all play a role in successful implantation.

In addition, there could be infections, polyps, endometriosis or congenital malformations in the uterus, which makes it difficult for the embryo to latch successfully.

When the embryo implants itself outside the uterus, in places like the ovary, fallopian tube, abdomen, or cervix, it is called an ectopic pregnancy. This type of pregnancy is not viable and may be dangerous for the mother because of the bleeding risk. According to studies, 1%- 2% of reported pregnancies are ectopic.

How to have successful implantation? Can you increase your chances?

You can take the usual precautions to increase your chances of a healthy pregnancy. Ensure a well-balanced diet, moderate exercise levels, an effort to reduce stress and nutritional antenatal supplements like folic acid and iron.

When you are working towards getting pregnant, every small step takes you towards your goal. Implantation is an essential phase in your fertility journey and remaining in tune with the signals your body is sending you, can help you track your progress.